BricsCAD is always FREE for students and schools

Pushing the Limits of Parametric Modeling with BricsCAD® Mechanical

If you were watching the Bricsys® Digital Summit in October 2020, you might have noticed that the Mechanical team presented the latest developments for BricsCAD® Mechanical V21 with the aid of a detailed assembly -- "The Brewery". The parametric model consisted of over 3,000 parts (of which 500 are unique) and included more than 1,000 constraints, the majority of which were added automatically by BricsCAD. Despite this level of complexity, the model still runs flawlessly.

Unfortunately, there simply wasn't enough time during the presentation to showcase the incredible complexity and level of detail added to the model by the team. Fortunately, the Bricsys Blog has the opportunity to take the model apart and have an in-depth look at the brewery in all its glory.

The Brewery showcased BricsCAD Mechanical at its finest, from a fully animated bottle filling assembly, to an elaborate, parametric system of pipes, all created using BricsCAD!

This year's design was inspired by the maltese cross mechanism (geneva drive), which converts continuous rotary movement into intermittent rotation. The mechanism was used in The Brewery to push the bottles onto the belt at uniform intervals.

The Brewery really makes the most of BricsCAD Mechanical's parametric modeling capabilities and demonstrates just how easy it is to create a model with parametrically variable, equipment configurations.

In the Brewery, you accommodate different bottle sizes in the assembly and parametrically change the distance between the nozzles, the forks on the bottle spacer assembly, the rails on the conveyer belt, the rotary platform, and even the frame assembly.

You can also change the number of nozzles and the number of forks on the bottle spacer assembly, again by altering just one parameter.

Another cool feature in The Brewery that it demonstrates how it is possible, in BricsCAD, to create limits for parameter values. There are 2 parameters that limit the movement of the nozzle valve before it opens and ensure that the bottle spacer stops at the right point.

There are also parameters in the model that can be used to animate the chain, rotate the rotary platform and drive other moving parts!

The arrays used in the cap duct and cap rotation drum assemblies were created along a path, whilst the chain array was created on a closed polyline. To move the arrayed elements along the path, you need only to change the offset parameter.

Creation of models from structural elements

Meanwhile, the frame demonstrates the possibility for users to create models from structural elements. 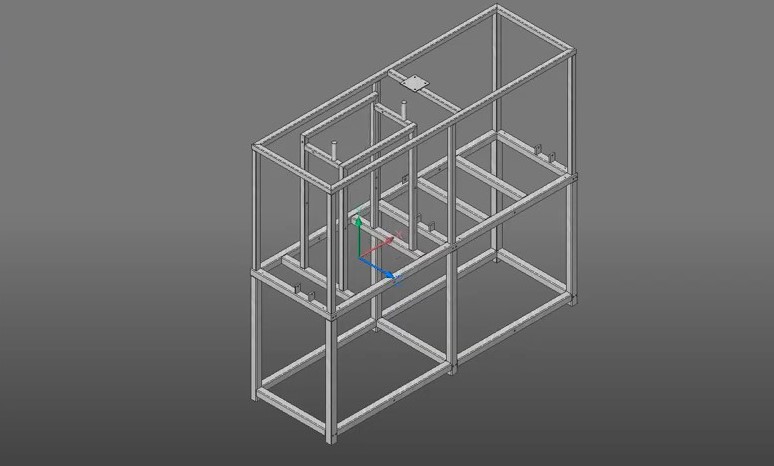 Standard parts are used to connect the various parts of the brewery together. There are over 100 parametric parts available for use in BricsCAD Mechanical. Because The Brewery was created using standard parametric parts, the whole of the piping system can be edited dynamically with the manipulator.

And of course, I don't need to remind you that the control box was created live during the presentation by converting a solid into sheet metal in less than 3½ minutes, which included automatic junction creation!

Build your own Parametric models with BricsCAD Mechanical

Viewports in BricsCAD - The Basics

In BricsCAD, by default you will be in the Model Space. In the example below, you can see the Model Tab is active, and you can switch over to Paper Space by clicking on any of the Layout Tabs.

In our latest instalment of ‘Meet the team that makes Bricsys’, we get to know Fleur Dooms. Starting off her career as a student with Bricsys, Fleur excelled and has now been a BricsCAD BIM Product Specialist on the Bricsys team for almost 3 years.

As a native Floridian I grew up with all sorts of interesting career opportunities around me. With theme parks in my backyard and Kennedy Space Center just down the road, it was easy to get lost in potential careers such as lead roller coaster engineer or space station designer...

An Implementation Consultant’s view of BricsCAD in the BIM World

If you have ever discussed French wine, the one word that always stands out is ‘Terroir’... During my recent visit to BIM World, I spent some time roaming the show floor trying to decipher what was on offer. The one word that stood out was ‘BIM’.

So, let’s look at Terroir and see how we might approach the design of a winery using some BIM principles and, of course, BricsCAD!

Whilst anniversaries like this often inspire reflection, we continue to look forward and focus on the future.

Design presentation: it's important to have great visuals. However, it's easy to fall into some common mistakes, how many are you making?

On your way to becoming a CAD engineer? Find out why good writing skills for CAD are so important, and how you can improve yours today!

Solar cells that are completely transparent. Think buildings, windows, and even the screen of your cell phone!

The Winners of the Bricsys Student Design Challenge 2021. Design something in BricsCAD to help people stay connected without touch.

CAD landscape design software: Why is it a game changer?